Your Love For Science Is Religious

Yes people, it is the heyday of SCIENTISM and SOPHISTRY!!!

Lancet and the New England Journal of Medicine are the two most prestigious medical journals in the world.

It is therefore striking that their chief editors have both publicly written that corruption is undermining science.

Much of the scientific literature, perhaps half, may simply be untrue. Afflicted by studies with small sample sizes, tiny effects, invalid exploratory analyses, and flagrant conflicts of interest, together with an obsession for pursuing fashionable trends of dubious importance, science has taken a turn towards darkness. As one participant put it, ''poor methods get results''. The Academy of Medical Sciences, Medical Research Council, and Biotechnology and Biological Sciences Research Council have now put their reputational weight behind an investigation into these questionable research practices. The apparent endemicity [i.e. pervasiveness within the scientific culture] of bad research behaviour is alarming. In their quest for telling a compelling story, scientists too often sculpt data to fit their preferred theory of the world. Or they retrofit hypotheses to fit their data. Journal editors deserve their fair share of criticism too. We aid and abet the worst behaviours. Our acquiescence to the impact factor fuels an unhealthy competition to win a place in a select few journals. Our love of ''significance'' pollutes the literature with many a statistical fairy-tale. We reject important confirmations. Journals are not the only miscreants. Universities are in a perpetual struggle for money and talent, endpoints that foster reductive metrics, such as high-impact publication. National assessment procedures, such as the Research Excellence Framework, incentivise bad practices. And individual scientists, including their most senior leaders, do little to alter a research culture that occasionally veers close to misconduct.

Part of the problem is that no-one is incentivised to be right.

Similarly, the editor in chief of the New England Journal of Medicine, Dr. Marcia Angell, wrote in 2009:

It is simply no longer possible to believe much of the clinical research that is published, or to rely on the judgment of trusted physicians or authoritative medical guidelines. I take no pleasure in this conclusion, which I reached slowly and reluctantly over my two decades as an editor of The New England Journal of Medicine.

In her must-read essay, Dr. Angell skewers drug companies, university medical departments, and medical groups which set the criteria for diagnosis and treatment as being rotten with corruption and conflicts of interest.

And we've previously documented that the government sometimes uses raw power to cover up corruption in the medical and scientific fields.

Postscript: Corruption is not limited to the medical or scientific fields. Instead, corruption has become systemic throughout every profession ... and is so pervasive that it is destroying the very fabric of America. 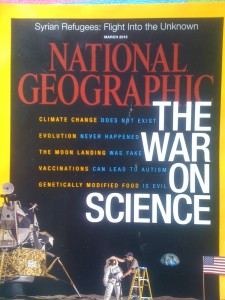 Beware Of Scientism Or The So Called Science Most BELIEVE In

Scientism may refer to science applied "in excess". The term scientism can apply in either of two senses:

And the next DOT:

Author: DMC | Category: BeautifulLie, Cosmology, HoaxAlert, MainStreamMediaBS, NaturalLaw, Physics, Religion, Scientism, ShillAlert, SocialEngineeringno comments | Tags: Beautiful Lie, Geocentrism, GRAVITY, Heliocentrism, Scientism, Sophistry
http://www.universetoday.com/36487/difference-between-geocentric-and-heliocentric/
The geocentric model was developed thousands of years ago by Greek philosophers and was the accepted model of the Solar System for centuries. Geocentric actually means earth centered. This model is also called the Ptolemaic system in honor of the Greek scientist and philosopher Claudius Ptolemy, although the thory was around years before him. The geocentric model places the Earth at the center of the universe with the Sun, Moon, stars, and planets circling it.
The heliocentric model, which means sun centered, gradually replaced the geocentric model. This new system places the Sun at the center of the Solar System with the Earth and all the other planets orbiting it. This theory revolutionized everything because it reversed centuries of established opinion. Although the idea of a heliocentric model had been around as early as 200 B.C., it did not gain popularity until the 16th century.
One reason why the geocentric model remained in popularity for so many years is because it did explain many observations made by the early Greeks. For example, the geocentric model explained why things fall toward Earth – gravity – as well why Venus seems to stay the same distance from Earth based on its unchanging brightness. As astronomers saw problems with the geocentric theory, they altered it in order to account for these discrepancies. Another reason why this model remained in popularity so long was because it went along with the Roman Catholic Church’s policy.
As technology advanced, more problems surfaced facing the geocentric model. In the 16th century, the astronomer Nicolaus Copernicus built on the work of earlier scientists and published his heliocentric theory in his book On the Revolutions of the Heavenly Bodies. In this book, he made some radical changes, such as asserting that the stars do not orbit the Earth and declaring that the Earth’s rotation is what makes it appear as if the stars orbit our planet.
Read more: http://www.universetoday.com/36487/difference-between-geocentric-and-heliocentric/#ixzz2NsxRzQwv
necessarily correct. Einstein’s Theory of Relativity upset both models. New evidence has also shown that the Solar System’s center of gravity is not the exact center of the Sun. This means that either model is acceptable regardless of the fundamental differences between the theories. Astronomers use both the heliocentric and geocentric models for research depending on which theory makes their calculations easier. It definitely seems as if some things are relative after all.
Universe Today has articles on both the heliocentric model and the geocentric model.
There are a number of other articles you will want to read including geocentric theory and the center of the galaxy.
Astronomy Cast has an episode on the center of the universe.
Reference:
NASA Earth Observatory: Planetary Motion
Read more: http://www.universetoday.com/36487/difference-between-geocentric-and-heliocentric/#ixzz2Nsxaxm6Z

So WHY can't modern science RECONCILE the helio- and geocentric model (A FALSE DICHOTOMY!) of our "Solar System"? THAT should strike anyone as ODD. As mentioned: Astronomers use both the heliocentric and geocentric models for research depending on which theory makes their calculations easier. Well, there are NAMES for such practices; SCIENTISM, SOPHISTRY, TAILORING EVIDENCE, take your pick.

And what has GRAVITY, THEE COMMON DENOMINATOR OF THE IRRECONCILABLE MODELS to do with any of that, since it is a FORCE  NOT  to be reckoned with: "Gravity is the weakest of the four fundamental forces of nature. The gravitational force is approximately 10−38 times the strength of the strong force (i.e. gravity is 38 orders of magnitude weaker), 10−36 times the strength of the electromagnetic force, and 10−29 times the strength of the weak force. As a consequence, gravity has a negligible influence on the behavior of sub-atomic particles, and plays no role in determining the internal properties of everyday matter." - Wikipedia

Mind you that one of the greatest genius of all time, Nikola Tesla, did NOT think 'gravity' exists. Let's TRY to understand WHY.